Thriving shore meadows, a lush deciduous forest and one of Europe’s most important wetlands. Lake Hornborga Nature Reserve is a unique place with significant things nature has to offer.

Lake Hornborga Nature Reserve is about 4,000 hectares in size. It was formed in 1997, after an extensive restoration project. Most of the nature reserve consists of the lake, which is ten kilometres long and about three kilometres wide, but in most places it is barely one metre deep. This is why it’s actually more than a wetland than a lake.

The shallow wetlands constitute the vibrant heart of the Nature Reserve. Under the water’s Northern pike, bream and European perch, among other fish, swim, as well as lots of aquatic insects. You will find aquatic beetles called predaceous diving beetles here. Aquatic plants shoot up from the water, and there are unusually many species of charophyte green algae flourishing here.

The large supply of food in the form of insects, algae and aquatic
plants is one of the reasons why birds simply love Lake Hornborga. Tens of thousands of birds visit the lake each and every year. Many species breed here, while others simply pass by the lake during their migration.

Lake Hornborga is a special place where you can experience birds up close. One of several good places is Fågeludden (the Bird Point) on the western side of the lake where Naturum Hornborgasjön is located. There are handicapped-accessible footbridges here that lead you out over the water.

In total, there are nine different visitor sites around the Nature Reserve. Each and every one of them are well worth a visit. Read more about the destinations to visit under the page about our hiking trails.

Wherever you go in the Nature Reserve, you will see that this is a landscape that has been cultivated by people for thousands of years. The traces can be seen in the form of beautiful stone walls, felled trees and old pastures. Around the Nature Reserve you can also see unique table mountains such as Billingen and Mösseberg.

In the wonderfully beautiful cultural landscape at Bolums Lider on the eastern side of the lake, history is visible. Here, the plants are dependent on grazing animals and harvesting. Plants such as common milkwort (Freya’s hair), dropwort, ground thistle and mountain clover thrive here. Without the care that takes place in the Nature Reserve today, many species would disappear.

More about the table mountains

Map over the Hornborga nature reserve 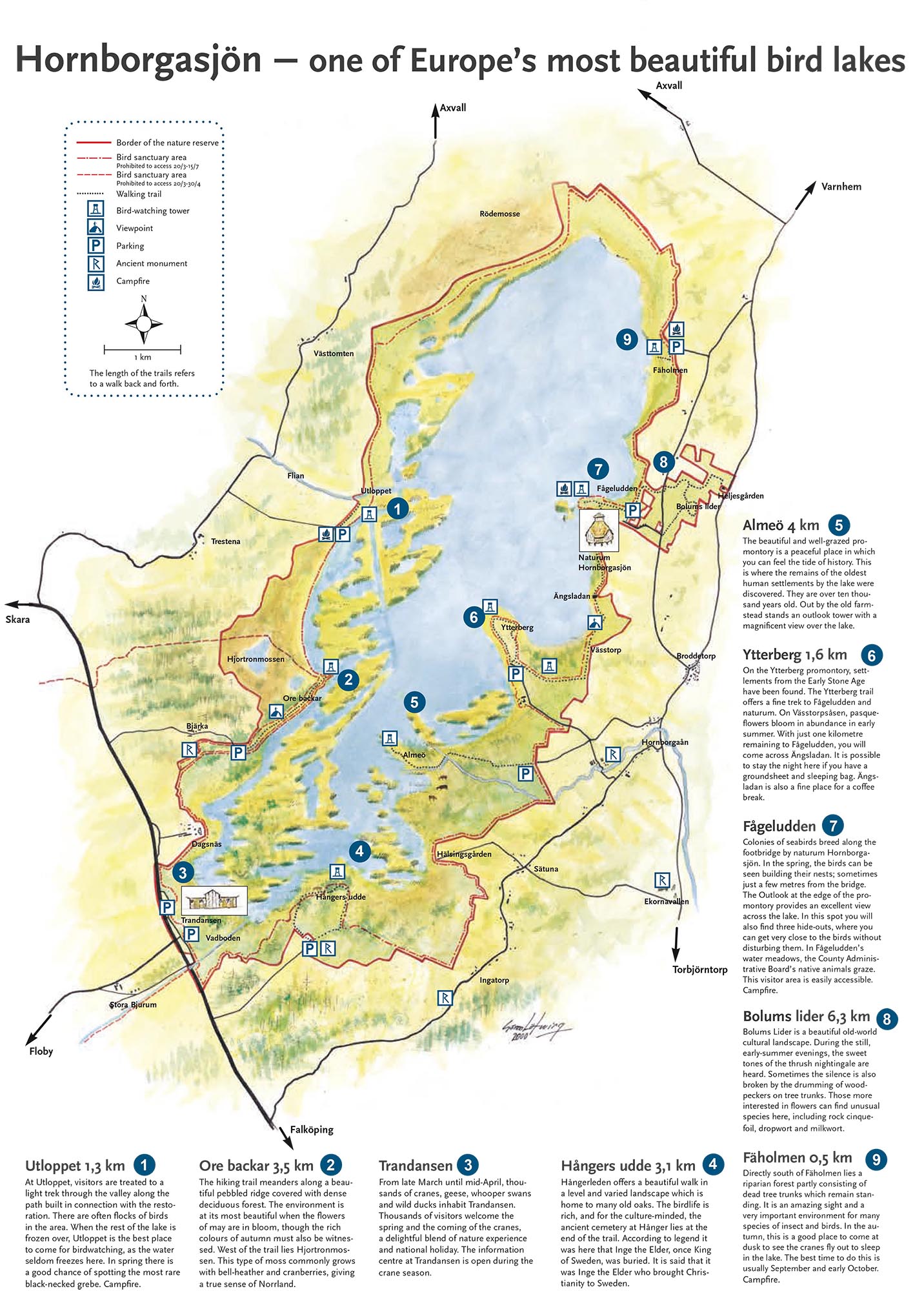 PLACES TO VISIT IN THE NATURE RESERVE

There are nine visitor sites in the Lake Hornborga Nature Reserve. They are illustrated on the map above. Several of the visitor sites have walking tracks and bird towers.